May the Force Be With UBI 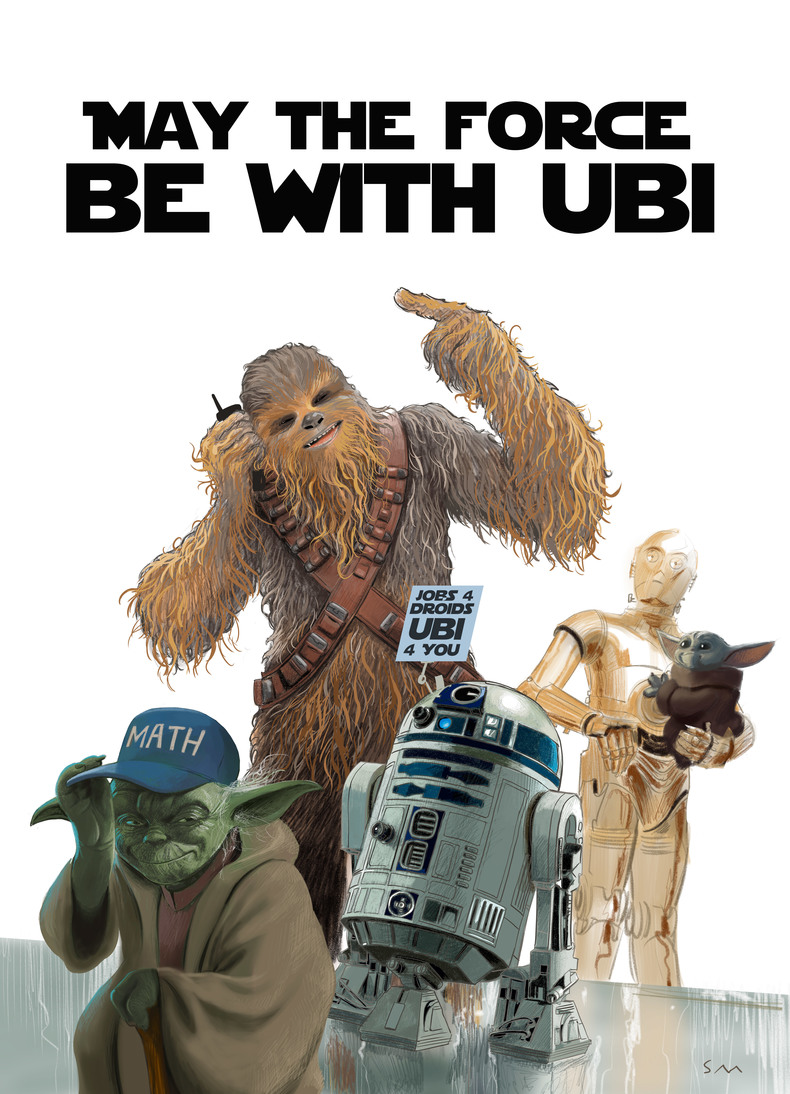 There is no film I've watched more than Star Wars: A New Hope except for maybe The Empire Strikes Back. If I were to venture a guess as to how many times I've seen each of them, and also Return of the Jedi, all I can say is it's in the triple digits for each one. I've read dozens of Star Wars Expanded Universe novels, I attended the first ever Star Wars Celebration where I cosplayed as a Dark Jedi complete with a lightsaber I constructed myself out of an old Graflex camera flash tube, and when The Phantom Menace came out, I was one of those fans who stood in line for over a week to be among the first to watch it in a theater full of fans as excited as I was.

Now that you know what a huge Star Wars geek I am, I want to connect the plot of Star Wars to the need for unconditional basic income.

For anyone who has never watched the very first film, it involves a Death Star, which is a moon-sized superweapon capable of destroying entire planets. This weapon was created to rule the galaxy with an iron fist. Where a Galactic Republic used to exist, where each planet had representatives in the Galactic Senate, with the creation of the Death Star, the Senate is dissolved entirely, and regional governors must answer to the Empire upon the threat of destruction.

Asked how the Emperor will maintain control without the Imperial Senate, Grand Moff Tarkin replies, "Fear will keep the local systems in line. Fear of this battle station."

Within those two sentences, the reason poverty still exists is explained. It's not about the money. It's all about control. Poverty is a superweapon, and the fear of poverty is what keeps people in line.

Poverty is a Death Star.

Poverty as we know it does not naturally exist. It is human-made. It was constructed. Until relatively recently in human history, access to our planet's natural resources was free. We hunted and gathered for ourselves and our families and our extended families. Survival could be secured with a few hours of work a week. All of this changed when we invented private property. Those with the power to do so enclosed the commons, called it theirs, and commanded those excluded from the land to work the land for its new owners.

Thomas Paine recognized the evil of this over two hundreds years ago when he wrote Agrarian Justice.

The thing, therefore, now to be done is to remedy the evils and preserve the benefits that have arisen to society by passing from the natural to that which is called the civilized state. In taking the matter upon this ground, the first principle of civilization ought to have been, and ought still to be, that the condition of every person born into the world, after a state of civilization commences, ought not to be worse than if he had been born before that period... It is a position not to be controverted that the earth, in its natural, cultivated state was, and ever would have continued to be, the common property of the human race. In that state every man would have been born to property. He would have been a joint life proprietor with the rest in the property of the soil, and in all its natural productions, vegetable and animal... Every proprietor, therefore, of cultivated lands, owes to the community a ground-rent (for I know of no better term to express the idea) for the land which he holds; and it is from this ground-rent that the fund proposed in this plan is to issue... In advocating the case of the persons thus dispossessed, it is a right, and not a charity, that I am pleading for.

We are the only species on Earth that has to pay to exist. It hasn't always been that way. We made it that way. We constructed poverty as we know it. We have so much food that half of it goes to waste. We have so many homes that there are five times more vacant homes than people experiencing homelessness. We have so much productive capability that we only produce about 70% as much as we have the existing capacity to produce. The existence of hunger and homelessness in the United States is entirely unnecessary. Poverty is a legal status imposed on those excluded from legal access to the needs of life. It is economic injustice. It is a weapon.

The Death Star was created to destroy planets, but its true power was not in that destruction, but in all other planets fearing their own destruction. It is for that reason, that Tarkin chooses to destroy Leia's home planet of Alderaan. It's not because Alderaan did anything wrong. Alderaan didn't deserve to be destroyed. It was destroyed as an example to everyone else.

That's exactly how poverty works. Yes, poverty kills people, and the people it kills don't deserve it. They are simply sacrifices to demonstrate why people need to do what they're told. The true power of poverty is in everyone's fear of it. If you are afraid of poverty, you will accept that shitty job for that shitty wage. You will do that work you feel is wrong, that hurts other people or the environment, because it's better than hunger and homelessness. You will keep your mouth shut when you would otherwise speak up. You will not rock the boat, if that means possibly losing your job, and being next on the Death Star's list. You will serve the Empire.

In Star Wars, a small band of rebels discovers that the Death Star has a weakness, and they risk their lives to exploit that weakness and destroy the Death Star in order to free the galaxy from the oppressive control of the Empire. Martin Luther King, Jr. discovered that weakness half a century ago.

The programs of the past all have a common failing — they are indirect. Each seeks to solve poverty by first solving something else. I’m now convinced that the simplest approach will prove to be the most effective — the solution to poverty is to abolish it directly by a now widely discussed measure: the guaranteed income... We are likely to find that the problems of housing and education, instead of proceeding the elimination of poverty, will themselves be affected if poverty is first abolished.

The Death Star could not be destroyed by just shooting at it with all kinds of various weapons. There was only one way it could be done, which was firing a proton torpedo down its exhaust port. In the same way, there is only one way to destroy poverty, and that is to abolish it directly, by firing a basic income torpedo down its exhaust port. Poverty is a lack of money, and so to end poverty, we must create an income floor that lifts everyone above the poverty line. That's unconditional basic income. With UBI, poverty is gone, and with it, the fear of poverty is gone, and with that, control is gone. A society free of the fear of poverty is a free society, free to do what it wants, and say what it wants. It's a society of mutual consent where everyone has the power to walk away from an abusive personal or working relationship, instead of having no choice but to agree out of fear.

The UBI movement is the Rebel Alliance. It's up to us to destroy the Death Star of poverty. It is not an easy fight. It never has been. The way things are serve the powerful just fine. They want to be in control. They want people to be afraid. They want people to accept things as they are. What they don't want is for us to realize we can destroy their superweapon.

What the Empire didn't realize in Star Wars, was that the Force was with the Rebels. It wasn't just any X-wing that destroyed the Death Star. It was the X-wing of a Jedi who turned off his targeting computer. It wasn't really the torpedo itself which destroyed the Death Star. It was the Force-wielder behind it. It was a belief that it could be done.

As Yoda explains in The Empire Strikes Back, the Force is created by life. "Life makes it grow. Its energy surrounds us and binds us." The destruction of the Death Star utilized technology, but it was a matter of life choosing life. The existence of poverty is a matter of choosing fear. We have the technology to end poverty. We have the natural resources and the knowledge. But do we have the will? Because that in the end is what it will take.

Enough of us must collectively decide to destroy poverty with UBI. We have to believe we can do it. Only when we believe that power is within us, will we finally destroy the Poverty Death Star.

If you liked this post and want to go deeper, watch this next: