On January 29, 2018, The People's Currency Foundation (a U.S.-based 501(c)(3) nonprofit) published their whitepaper for Manna, a relaunching of the basic income cryptocurrency formerly known as Grantcoin, which was the first publicly traded blockchain currency to be distributed universally to all those verified as unique applicants.

Note: In the interest of full disclosure, I was a recipient of each of these disbursements.

Since the last disbursement in August of 2017, disbursements have been paused as Grantcoin began the transition to Manna. Disbursements are expected to begin again this month as Manna, and on a new weekly basis to all verified accounts, of which there now number over 6,000 from over 100 countries around the world.

Since May of 2017, Grantcoin (now Manna) has seen a significant increase in value, and as of this writing can be exchanged on the SouthXchange for $0.011 USD. As shown in the chart below, the market price approximately doubled in 2015, more than doubled again in 2016, and increased more than 16-fold in 2017 – for a total gain of over 8,000% through January 1, 2018. (Note: The price has continued to increase, with another doubling already in 2018, not shown on this chart.)

Considering each disbursement was around 7,000 coins per recipient, that's an unconditional grant of about $75 per person per disbursement in today's USD cash equivalent market value, and more for those receiving referral bonuses. That may not sound like much to those in countries like the US, UK, and Canada, but for those in countries like Kenya, that's a full basic income sufficient to cover basic needs. In fact, to give some further context, the largest basic income experiment ever devised is going on in Kenya right now, where the NGO GiveDirectly is providing monthly basic incomes of around $22 USD for the next 12 years.

With the above in mind, Manna appears therefore an entirely realistic way of immediately providing basic incomes anywhere in the world, given sufficient access to currently available technology. And over time, as the value of Manna increases, it could potentially reach sufficient value to be considered enough for securing of basic needs in countries like the United States, especially in more rural areas, and in turn be considered far, far more than basic in places like East Africa where hundreds of dollars a month would be sufficient to provide median-level incomes as a monthly starting point.

Manna is planned to be distributed on a weekly basis, and divided equally among all recipients. A desktop wallet is now available in beta form (for Windows and Linux with Mac coming soon), with a web-based wallet also expected to be released soon. A block explorer for Manna is also now available for use.

The Manna money supply is planned to increase at an annual rate of 3.5%, chosen because it's close to the historical average inflation rate of the US. For comparison, the inflation rate on Steemit is around 9% right now.

The value of Manna is determined not only by the market exchange rate, but unlike most other cryptocurrencies, it is also backed by tax deductible donations to the 501(c)(3) People's Currency Foundation. One future goal is to go even further with this model by pursuing something similar to Alaska's Permanent Fund, where a diverse portfolio of investments would further back the cryptocurrency.

A referral process is in place for Manna where those who sign up through a referral link (such as this one), will receive a 50% bonus for one year, and those who refer others with their own referral links will receive their own bonus as well. The referral system is however temporary as a means of accelerating adoption, like how PayPal started, with plans to phaseout in time.

Because recipients of Manna are all over the world, this provides a very interesting way to help others all over the world. Through the Mannabase platform, users will be able to send a chosen percentage of their own Manna to others by region, for example, a place like Puerto Rico because of a hurricane, or a handful of countries based on their lower GDPs, or even a percentage of their weekly UBI to all other Manna UBI accounts. 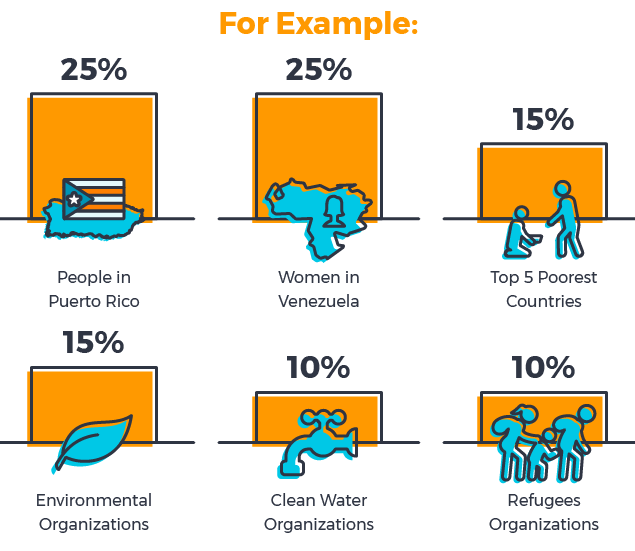 Furthermore, with the addition of profiles on Mannabase, it will be possible to send Manna to specific people based on specific criteria for those who choose to provide that information. For example, someone may wish to provide 10% of their weekly Manna UBI to those who are over 65, to help boost their incomes further.

Another interesting element is the ability to send Manna to those under the age of 18. Parents will be able to sign up their kids with sufficient proof of identity, but those under 18 will not be able to withdraw their Manna until 18. This opens the potential for those turning 18 to receive potentially quite large unconditional capital grants along the lines of what Thomas Paine advocated in Agrarian Justice.

Last but not least, here's the roadmap for Manna to see what the plan is over the next year. Notice the intention to provide entire communities with Manna to test full universality.

For those interested in other UBI cryptocurrencies as well, here's a list of those you can immediately start receiving:

Additional UBI cryptocurrencies in the works include:

Do you know of one not listed above? Please let me know.