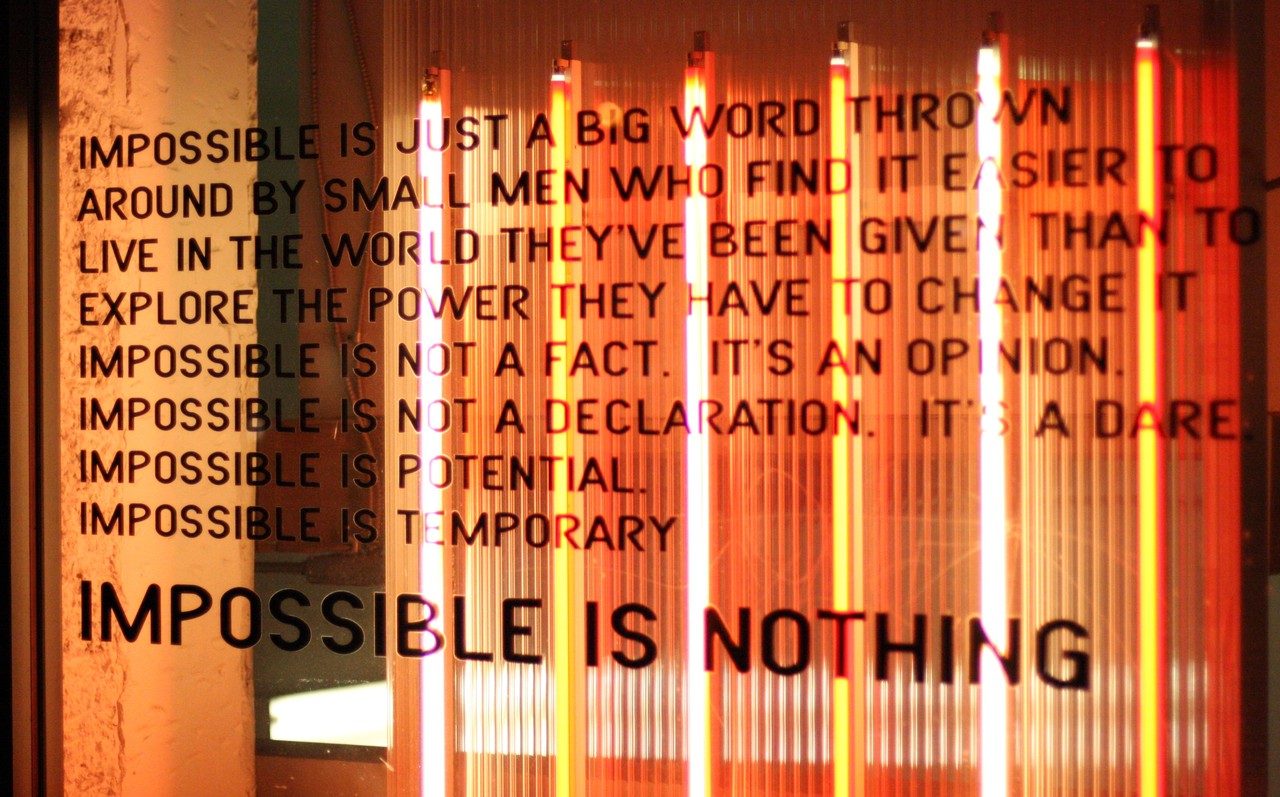 And so were all of these other ideas

No, I'm not quoting Luke Skywalker (although we certainly know he was wrong). I'm quoting a lot of people whose responses to the idea of basic income I've read since late 2013 when I subscribed to /r/BasicIncome on Reddit and started heavily studying it.

I don't only see this response to universal basic income. I see it to so many great ideas. I'm sure you have too, and may have even uttered these words yourself about something:

It always reminds me of a lesson from one of my science teachers I will hopefully never forget. The lesson was about how important it is to avoid using words like "always" or "never", or "impossible"; that instead we should replace them with "usually", "sometimes", "rarely", and "improbable."

Now that's a statement that ends up matching observed reality much more closely. So many times throughout history, and to this day, some really smart people either never learned or forgot the lesson my science teacher imparted with a class full of kids.

One of the purposes of recording history, if not the greatest purpose, is to learn from it, isn't it?

Well, with that in mind, I saved a link years ago, and I think of it almost every time someone says basic income or something else is impossible.

Professor Goddard...does not know the relation of action to re-action, and the need to have something better than a vacuum against which to react....he only seems to lack the knowledge ladled out daily in high schools.

-- 1920 New York Times editorial on Robert Goddard's rocket work. [The New York Times printed a retraction to this---in 1969, when the Apollo 11 astronauts were on their way to the Moon.]

Landing and moving about on the moon offers so many serious problems for human beings that it may take science another 200 years to lick them.

While theoretically and technically television may be feasible, commercially and financially I consider it an impossibility, a development of which we need waste little time dreaming.

The actual building of roads devoted to motor cars is not for the near future, in spite of many rumors to that effect.

Rail travel at high speed is not possible because passengers, unable to breathe, would die of asphyxia.

What can be more palpably absurd than the prospect held out of locomotives traveling twice the speed of stagecoaches?

Railroad Carriages are pulled at the enormous speed of 15 mph by engines which, in addition to endangering life and limb of passengers, roar and snort their way through the countryside, setting fire to the crops, scaring the livestock, and frightening women and children. The Almighty certainly never intended that people should travel at such breakneck speed.

Even originally well-defined pencils of cathode rays from the Sun cannot reach the Earth. For Birkeland's theories to be correct, the existence of such cathode rays is clearly presupposed to be necessary...and this assumption is untenable.

-- Arthur Schuster, on Kristian Birkeland's theory of what causes aurorae. The "cathode rays" are now called the solar wind.

X-rays will prove to be a hoax.

Flight by machines heavier than air is impractical and insignificant, if
not utterly impossible.

Aerial flight is one of that class of problems with which man will never be able to cope.

The resistance of air increases as the square of the speed and works as the cube [of speed].... It is clear that with our present devices there is no hope of aircraft competing for racing speed with either our locomotives or automobiles.

The popular mind often pictures gigantic flying machines speeding across the Atlantic carrying innumerable passengers in a way analogous to our modern steam ships. . . it seems safe to say that such ideas are wholly visionary and even if the machine could get across with one or two passengers the expense would be prohibitive to any but the capitalist who could use his own yacht.

A popular fantasy is to suppose that flying machines could be used to drop dynamite on the enemy in time of war.

By no possibility can the carriage of freight or passengers through mid-air compete with their carriage on the earth's surface. The field for aerial navigation is then limited to military use and for sporting purposes. The former is doubtful, the latter is fairly certain.

As far as sinking a ship with a bomb is concerned, you just can't do it.

Even considering the improvements possible...the gas turbine could hardly be considered a feasible application to airplanes because of the difficulties of complying with the stringent weight requirements.

I do not believe in the commercial possibility of induced radioactivity.

The energy produced by the breaking down of the atom is a very poor kind of thing. Anyone who expects a source of power from the transformations of these atoms is talking moonshine.

There is not the slightest indication that nuclear energy will be obtainable.

I must confess that my imagination, in spite even of spurring, refuses to see any sort of submarine doing anything but suffocating its crew and foundering at sea.

[Of celestial bodies] We may determine their forms, their distances, their sizes, and their motions---but we can never know anything of their chemical composition; and much less, that of organized beings living on their surface.

Since the 40-inch objective of the Yerkes refractor and the 200-inch mirror of the Palomar reflector have apparently reached the practical construction limits for telescopes of their respective types, it is extremely doubtful if a greater light-gathering eye of either kind will ever again be built.

This foolish idea of shooting at the moon is an example of the absurd length to which vicious specialization will carry scientists. To escape the Earth's gravitation a projectile needs a velocity of 7 miles per second. The thermal energy at this speed is 15,180 calories [per gram]. Hence the proposition appears to be basically impossible.

I am bold enough to say that a man-made Moon voyage will never occur regardless of all scientific advances.

There is no hope for the fanciful idea of reaching the Moon because of insurmountable barriers to escaping the Earth's gravity."

Space is clearly the great breakthrough of human knowledge---for centuries to come...We have a long and undistinguished record of America failing to anticipate the promise and potential of each new age of science, invention, and discovery...Even so far-sighted an American as Woodrow Wilson spent time denouncing the automobile. The steamboat, the locomotive, the airplane, all brought prophecies of doom and gloom. We have learned a lesson we surely do not need to be be taught again.

Fooling around with alternating currents is just a waste of time. Nobody will use it, ever. It's too dangerous. . . it could kill a man as quick as a bolt of lightning. Direct current is safe.

The concept is interesting and well-formed, but in order to earn better than a 'C,' the idea must be feasible.

If I had thought about it, I wouldn't have done the experiment. The literature was full of examples that said you can't do this.

Drill for oil? You mean drill into the ground to try and find oil? You're crazy.

-- Drillers who Edwin L. Drake tried to enlist to his project to drill for oil in 1859

These are smart people. Some of them like Einstein are considered among our greatest geniuses in human history. And even Einstein was wrong about nuclear energy.

It is important to maintain our humility. Let us steer clear of absolutes. The impossible tends to stay that way until someone who didn't know any better... does it.

So the next time you want to say something is impossible, ask yourself this first...

"Who am I to say what is impossible?"